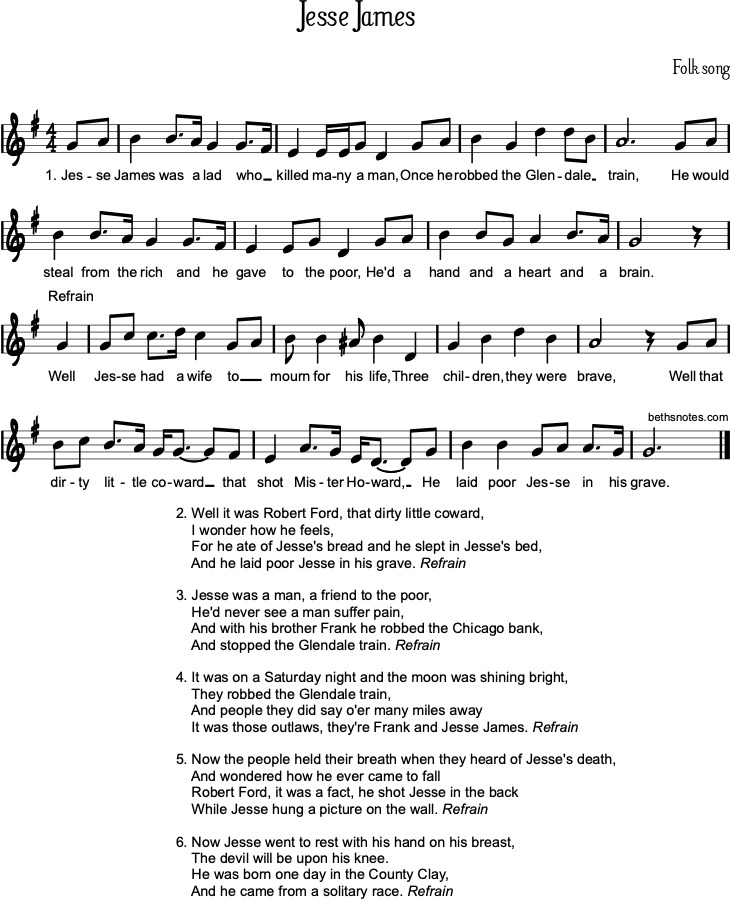 1. Jesse James was a lad who killed many a man,
Once he robbed the Glendale train,
He would steal from the rich and he gave to the poor,
He’d a hand and a heart and a brain.

Refrain
Well Jesse had a wife to mourn for his life,
Three children, they were brave,
Well that dirty little co-ward that shot Mister Howard,
He laid poor Jesse in his grave.

2. Well it was Robert Ford, that dirty little coward,
I wonder how he feels,
For he ate of Jesse’s bread and he slept in Jesse’s bed,
And he laid poor Jesse in his grave. Refrain

3. Jesse was a man, a friend to the poor,
He’d never see a man suffer pain,
And with his brother Frank he robbed the Chicago bank,
And stopped the Glendale train. Refrain

4. It was on a Saturday night and the moon was shining bright,
They robbed the Glendale train,
And people they did say o’er many miles away
It was those outlaws, they’re Frank and Jesse James. Refrain

5. Now the people held their breath when they heard of Jesse’s death,
And wondered how he ever came to fall
Robert Ford, it was a fact, he shot Jesse in the back
While Jesse hung a picture on the wall. Refrain

6. Now Jesse went to rest with his hand on his breast,
The devil will be upon his knee.
He was born one day in the County Clay,
And he came from a solitary race. Refrain