The Song of All Songs 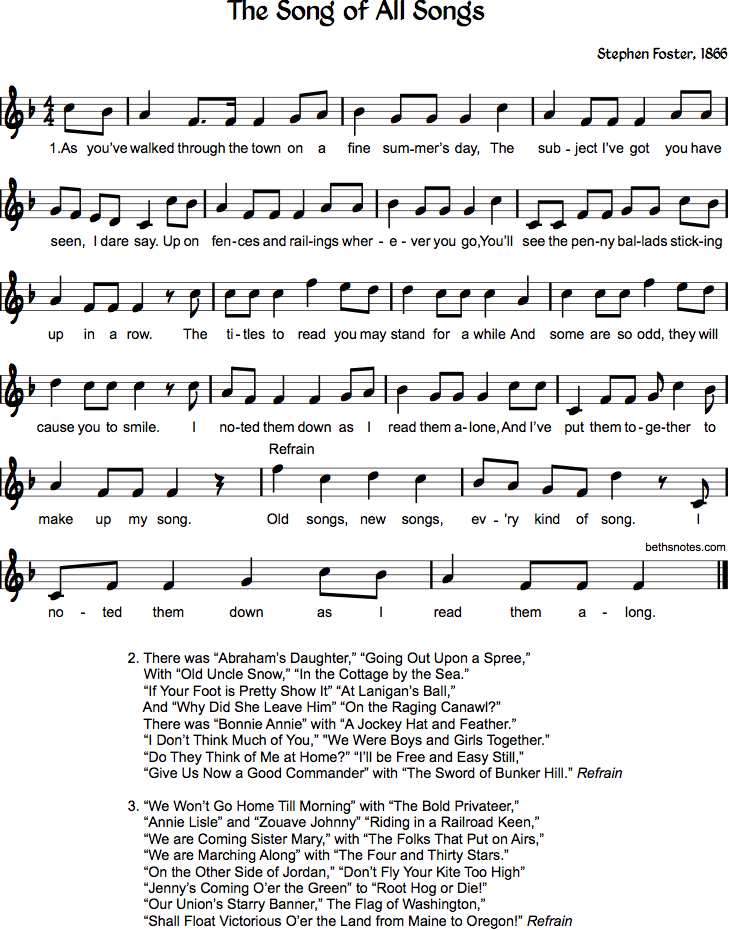 1. As you’ve walked through the town on a fine summer’s day,
The subject I’ve got you have seen, I dare say.
Upon fences and railings wherever you go,
You’ll see the penny ballads sticking up in a row
The titles to read you may stand for a while
And some are so odd, they will cause you to smile
I noted them down as I read them alone,
And I’ve put them together to make up my song

Refrain
Old songs, new songs, every kind of song.
I noted them down as I read them along.

2. There was “Abraham’s Daughter,” “Going Out Upon a Spree,”
With “Old Uncle Snow,” “In the Cottage by the Sea.”
“If Your Foot is Pretty Show It” “At Lanigan’s Ball,”
And “Why Did She Leave Him” “On the Raging Canawl?”
There was “Bonnie Annie” with “A Jockey Hat and Feather.”
“I Don’t Think Much of You,” “We Were Boys and Girls Together.”
“Do They Think of Me at Home?” “I’ll be Free and Easy Still,”
“Give Us Now a Good Commander” with “The Sword of Bunker Hill.” Refrain

3. “We Won’t Go Home Till Morning” with “The Bold Privateer,”
“Annie Lisle” and “Zouave Johnny” “Riding in a Railroad Keen,”
“We are Coming Sister Mary,” with “The Folks That Put on Airs,”
“We are Marching Along” with “The Four and Thirty Stars.”
“On the Other Side of Jordan,” “Don’t Fly Your Kite Too High”
“Jenny’s Coming O’er the Green” to “Root Hog or Die!”
“Our Union’s Starry Banner,” The Flag of Washington,”
“Shall Float Victorious O’er the Land from Maine to Oregon!” Refrain