Music Program: To the West 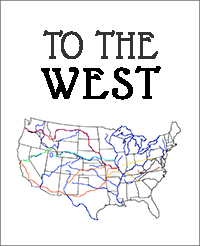 I have used this with 3rd graders.

I also teach dances from the Chimes of Dunkirk book/CD.

(2) The song of America, like the nation itself, is full of humor and faith, hope and confidence, and belief in ourselves and in our future.

(3) Tonight we celebrate the songs of the brave Americans who took their adventure TO THE WEST!

(4) The westward migration of settlers in America began well before the Revolutionary War and continued for over one hundred and fifty years.

(5) Some of the earliest settlers were led by Daniel Boone… going to Kentucky through the Cumberland Gap.

(6) Thousands of people migrated into the territory on a difficult four-to-six-month journey along the Oregon Trail.

(8) People came from all over the world to find their fortune in San Francisco.

(9) By the middle of the nineteenth century, many people wanted to settle on the Great Plains instead of going to the far West.

(10) The government added incentive by providing free land claims to those settlers who lived on and farmed the land for five years.

(11) With extreme temperatures and violent storms, life on the prairie could be harsh; but the land was fertile.

(12) With perseverance and hard work, a good living could be made.

(13) With few supplies or money, there were bound to be mishaps.  Listen to this song about an Irish family’s mistake!

(14) The United States of America grew to be the country we know today because of the brave people who went TO THE WEST! 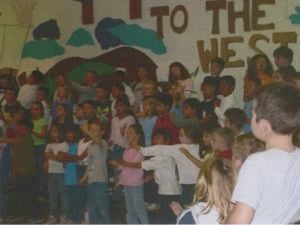