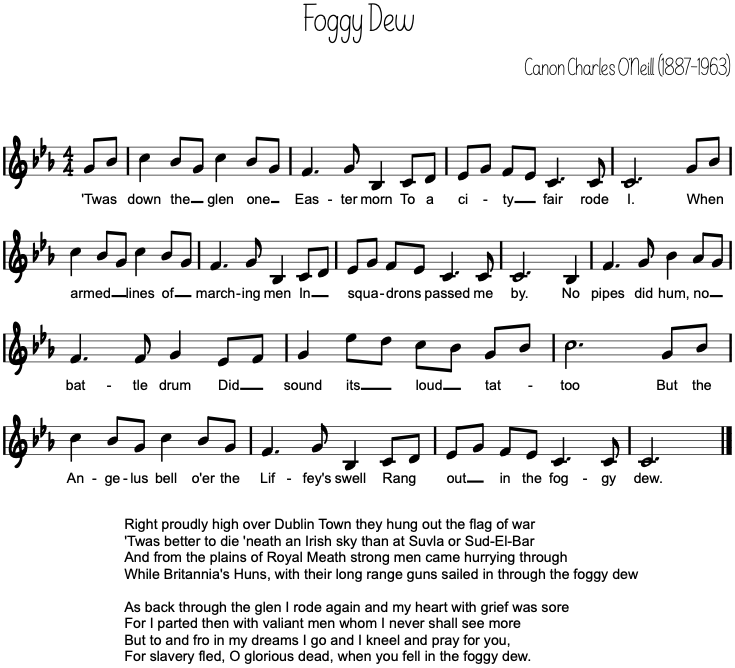 As down the glen one Easter morn to a city fair rode I
There Armed lines of marching men in squadrons passed me by
No pipe did hum, no battle drum did sound its loud tattoo
But the Angelus Bell o’er the Liffey’s swell rang out in the foggy dew

Right proudly high over Dublin Town they hung out the flag of war
‘Twas better to die ‘neath an Irish sky than at Suvla or Sud-El-Bar
And from the plains of Royal Meath strong men came hurrying through
While Britannia’s Huns, with their long range guns sailed in through the foggy dew

Oh the night fell black, and the rifles’ crack made perfidious Albion reel
In the leaden rain, seven tongues of flame did shine o’er the lines of steel
By each shining blade a prayer was said, that to Ireland her sons be true
But when morning broke, still the war flag shook out its folds in the foggy dew

‘Twas England bade our wild geese go, that “small nations might be free”;
Their lonely graves are by Suvla’s waves or the fringe of the great North Sea.
Oh, had they died by Pearse’s side or fought with Cathal Brugha*
Their graves we’d keep where the Fenians sleep, ‘neath the shroud of the foggy dew.

Oh the bravest fell, and the Requiem bell rang mournfully and clear
For those who died that Eastertide in the spring time of the year
While the world did gaze, with deep amaze, at those fearless men, but few,
Who bore the fight that freedom’s light might shine through the foggy dew

As back through the glen I rode again and my heart with grief was sore
For I parted then with valiant men whom I never shall see more
But to and fro in my dreams I go and I kneel and pray for you,
For slavery fled, O glorious dead, when you fell in the foggy dew.