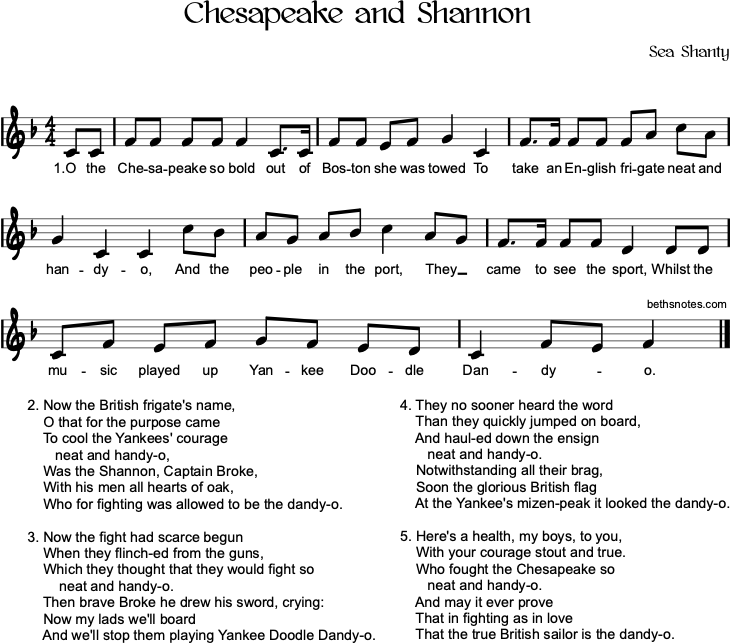 HMS Shannon was a 38-gun Leda-class frigate of the Royal Navy during the Napoleonic Wars and the War of 1812. (source)

1. O the Chesapeake so bold out of Boston she was towed
To take an English frigate neat and handy-o,
And the people in the port, They came to see the sport,
Whilst  the music played up Yankee Doodle Dandy-o.

2. Now the British frigate’s name,
O that for the purpose came
To cool the Yankees’ courage neat and handy-o,
Was the Shannon, Captain Broke,
With his men all hearts of oak,
Who for fighting was allowed to be the dandy-o.

3. Now the fight had scarce begun
When they flinch-ed from the guns,
Which they thought that they would fight so
neat and handy-o.
Then brave Broke he drew his sword, crying:
Now my lads we’ll board
And we’ll stop them playing Yankee Doodle Dandy-o.

4. They no sooner heard the word
Than they quickly jumped on board,
And haul-ed down the ensign
neat and handy-o.
Notwithstanding all their brag,
Soon the glorious British flag
At the Yankee’s mizen-peak it looked the dandy-o.

5. Here’s a health, my boys, to you,
With your courage stout and true.
Who fought the Chesapeake so
neat and handy-o.
And may it ever prove
That in fighting as in love
That the true British sailor is the dandy-o.