Threw it Out the Window 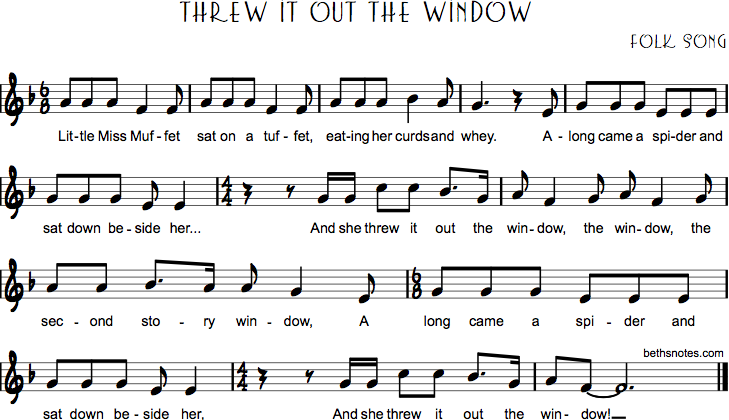 Now, of course, we don’t advocate violence, so we want to stress that all of these stories are silly and not true. It also helps to throw inanimate objects (or bugs, in my opinion) out the window instead of people.

Ideas for other nursery rhymes to sing:

Old Mother Hubbard went to the cupboard
To feed her poor dog a bone.
And when she got there, her cupboard was bare…
So she threw it out the window…

The three little kittens lost their mittens and didn’t know where to find them.
“Oh Mother dear, see here, see here,
We threw them out the window…”

Jack and Jill went up the hill to fetch a pail of water,
Jack fell down and broke his crown,
And threw it out the window…

Mary Had a Little Lamb, its fleece is white as snow,
And everywhere that Mary went,
She threw him out the window… (Of course, you wouldn’t want to hurt a real lamb by throwing him out a second-story window, but maybe you can pretend it’s a stuffed animal?)

Little Jack Horner sat in a corner
Eating his Christmas pie.
He put in his thumb and pulled out a plum,
And threw it out the window…

Lucy Locket lost her pocket,
Kitty Fisher found it.
Not a penny was there in it,
So she threw it out the window…

PrevPreviousThe City Blues
NextThere’s a Brown Girl in the RingNext

1 thought on “Threw it Out the Window”