Let Us Chase the Squirrel 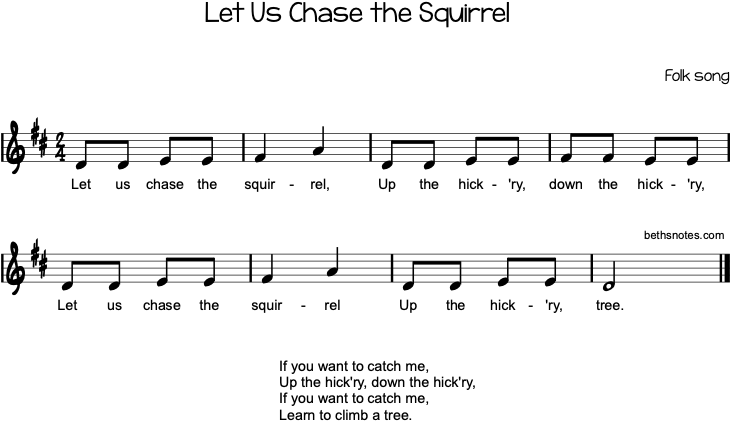 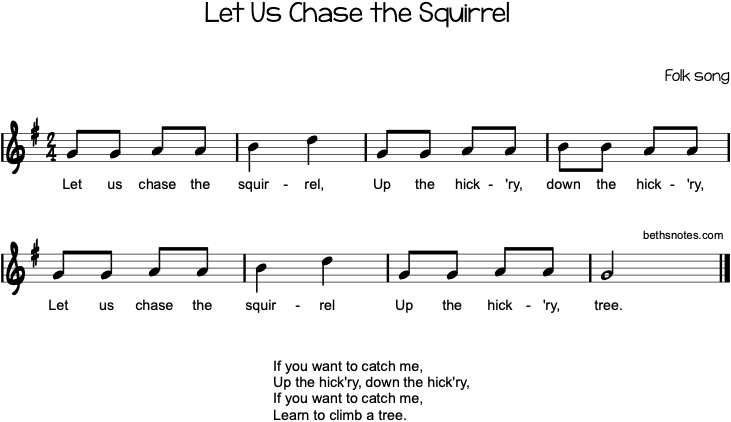 Version 1
Formation: Students sit in a circle with the “Squirrel” (“It”) standing outside of the circle holding a handkerchief with a knot in it.
When the song begins, “It” walks around behind the circle. “It” taps one student on the shoulder with the handkerchief, drops it behind the student and starts to walk quickly around the circle in one direction. The seated student grabs the handkerchief and walks in the other direction. When the two of them meet, they bow to each other three times and then continue walking quickly. “It” must reach the empty space first. The other student becomes the new “It.” (source)

Version 2
Formation: 1 student is the “Dog” (“It”). Divide the rest of the class in half as Trees and Squirrels.
While the song is being sung, the Trees stand still, the Squirrels and the Dog walk around. At the end of the song, the Dog tries to tap as many Squirrels as possible. The Squirrels can be safe if they curl up under Trees. The Squirrels who are tapped (before assuming a safe position) become the Dogs in the next round. Continue playing a few times, and then assign different roles for the students. (source)

Version 3
Formation: Students stand in a circle with hands behind their backs, cupped open. One student is the “Squirrel” (“It”).
When the song is sung, “It” walks around behind the circle. On the last word of the song, “It” places a large nut in a student’s hands and starts to walk quickly around the circle. That student tries to chase “It” as “It” tries to make it back to the open space in the circle. That student becomes the new “It.” (source)