Wyoming Where I Belong 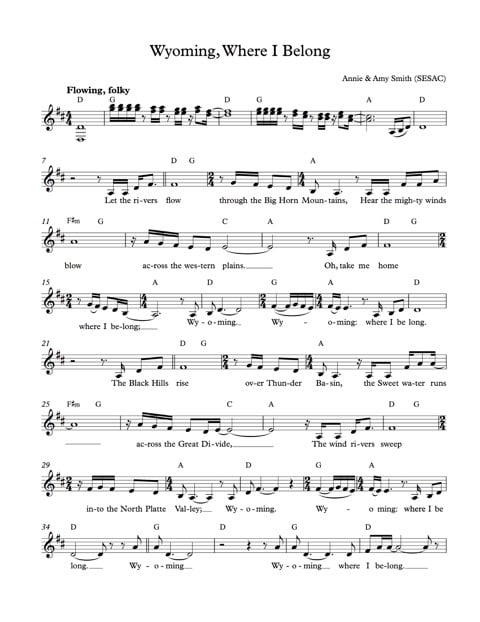 Let the rivers flow through the Big Horn Mountains,
Hear the mighty winds blow across the western plains,
Oh take me home where I belong,
Wyoming, Wyoming, where I belong.

The Story Behind the Song

Annie & Amy Smith, the composers of this song, shared this story with me:
The song “Wyoming Where I Belong” took an 18 year journey to arrive at its final destination
as an Official State Song of Wyoming. The song debuted in New York Central Park. The following morning the song, “Wyoming Where I Belong” played on “Good Morning America.” A few years later Amy and Annie were signed on Warner Bros. Records as Singer/Songwriters. They toured overseas, and the song was picked up on BBC radio all over Europe.

Soon “Wyoming Where I Belong” developed a large following in the States via social media. People from all over the world responded to this song saying “how much it reminded them of their home.”

We felt it important to respect and honor the original song, as it beautifully describes the settling of the west and Wyoming as a young, strong new state.

The new State song, “Wyoming Where I Belong” honors and compliments the existing State Song and continues this legacy by specifically focusing on our great state. The lyrics describe all parts of Wyoming, making it personal to the people of Wyoming and those who come to Wyoming as a place where they belong. “Wyoming Where I Belong” works hand in hand with the existing song, rejuvenates new listeners of all generations and gives parents, grandparents and children a sense of belonging.

We have given the song to Wyoming and can be used for education and for all to view and share.