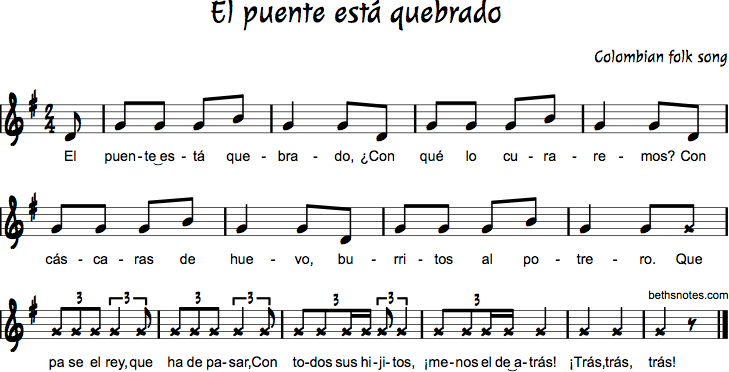 English Translation - The bridge is broken

The bridge is broken,
How do we fix it?
With egg shells,
Donkeys in the meadow.

Let the king pass
He should pass by
With all of his children
Except the one at the end!

Two children are “It.” Without letting the other students know, those two children decide each one of them will be a color, or an animal or a fruit. For instance, if they decide they will be colors, one of them could be red, and the other person could be blue. Similar to London Bridge, the two children hold arms up high, and other children walk under their “bridge” while singing the song. On the last word, the student going under the “bridge” is trapped by the two people lowering their arms. Quietly (without the other children hearing), they ask the student, “red or blue.” When the student chooses, the student lines up behind “It” who has chosen that color. The game resumes until all of the students have chosen a side. There will be two lines facing each other. Then they play a sort of tug of war with one line pulling against the other line. Both of the “it” children hold hands, and the students behind each one of them pull. The line that pulls the other group forward wins.