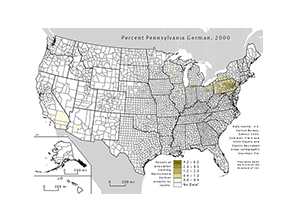 This is a dialect of German that is spoken by German immigrants in the U.S. and Canada, including some Amish and Mennonite groups. It is often called “Pennsylvania Dutch,” which refers to “Deitsch,” which is their word for “German.” There are about 300,000 people who speak this language today. (source)