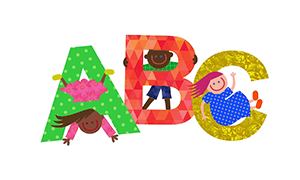 A was the Archer who shot at a frog.
B was Bo-peep, with her crook and her dog.
C was the Cow that jumped over the moon.
D was the Dish that ran off with the spoon.
E was Elizabeth, Betsey, and Bess.
F was the Forest where stood the bird’s-nest.
G Gaffer Longlegs, downstairs he’d a fall.
H Humpty Dumpty that sat on the wall.
I was that “I” who was going to St. Ives.
J Jacky Horner, on plum pie he thrives.
K was King Cole with his fiddlers three.
L Little Gold-Hair, peeping, you see.
M Mother Hubbard who thought her dog dead.
N Little Netticoat, with a red head.
O the old Woman “upon market day.”
P was the “Peddler” who passed by that way.
Q was the Queen of Hearts, tartlets she makes.
R was Red Riding Hood carrying the cakes.
S Simple Simon, the pieman beside.
T Tommy Tucker, for supper who cried.
U was the Unicorn, “beat round the town,”
V was Victoria—she fought for her crown.
W Whittington, who turned again,
Over great London as Lord Mayor to reign.
X is a letter that here we can spare.
Y “Yankee Doodle,” that went to the fair,
Z is the Zany who laughed at him there.