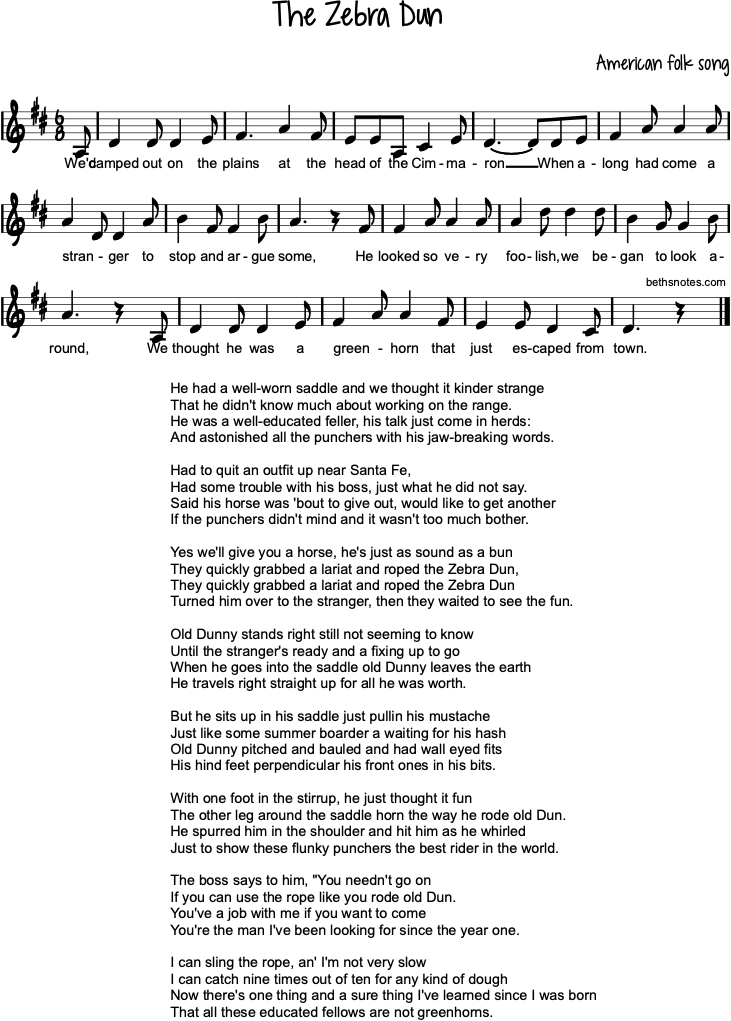 Zebra Dun is a horse. “Zebra” refers to the brand “Z-bar,” and “dun” is a dull shade of brown. (source: Sail Away, Locke)

We’d camped out on the plains at the head of the Cimmaron
When along had come a stranger to stop and argue some
He looked so very foolish, we began to look around
We thought he was a greenhorn that just escaped from town

He had a well-worn saddle and we thought it kinder strange
That he didn’t know much about working on the range.
He was a well-educated feller, his talk just come in herds:
And astonished all the punchers with his jaw-breaking words.

Had to quit an outfit up near Santa Fe,
Had some trouble with his boss, just what he did not say.
Said his horse was ’bout to give out, would like to get another
If the punchers didn’t mind and it wasn’t too much bother.

Old Dunny stands right still not seeming to know
Until the stranger’s ready and a fixing up to go
When he goes into the saddle old Dunny leaves the earth
He travels right straight up for all he was worth.

But he sits up in his saddle just pullin his mustache
Just like some summer boarder a waiting for his hash
Old Dunny pitched and bauled and had wall eyed fits
His hind feet perpendicular his front ones in his bits.

With one foot in the stirrup, he just thought it fun
The other leg around the saddle horn the way he rode old Dun.
He spurred him in the shoulder and hit him as he whirled
Just to show these flunky punchers the best rider in the world.

The boss says to him, “You needn’t go on
If you can use the rope like you rode old Dun.
You’ve a job with me if you want to come
You’re the man I’ve been looking for since the year one.

I can sling the rope, an’ I’m not very slow
I can catch nine times out of ten for any kind of dough
Now there’s one thing and a sure thing I’ve learned since I was born
That all these educated fellows are not greenhorns.