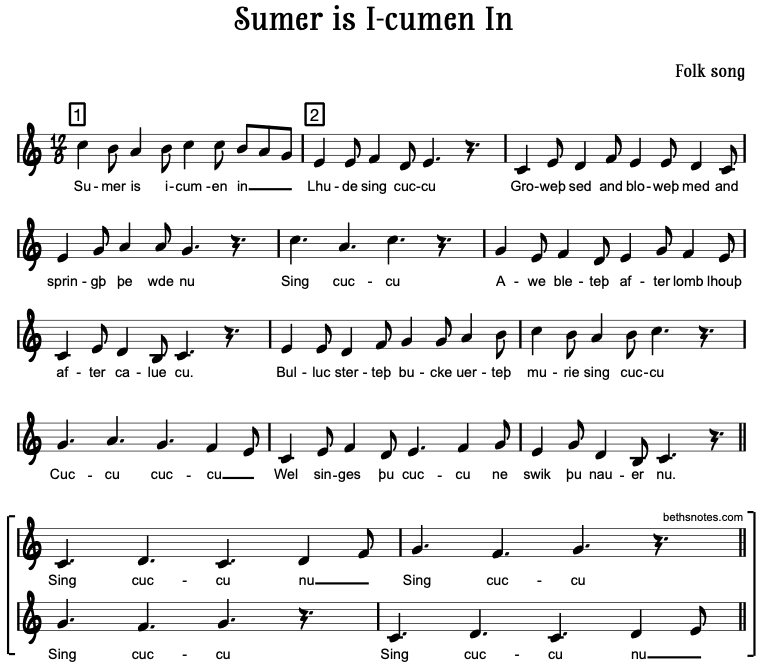 “Sumer Is Icumen In” (also called the Summer Canon and the Cuckoo Song) is a medieval English rota (the oldest known musical composition featuring six-part polyphony) of the mid-13th century.

The title translates approximately to “Summer Has Come In” or “Summer Has Arrived”. The song is composed in the Wessex dialect of Middle English. Although the composer’s identity is unknown today, it may have been W. de Wycombe. The manuscript in which it is preserved was copied between 1261 and 1264. (source)

Summer has arrived,
Loudly sing, cuckoo!
The seed is growing
And the meadow is blooming,
And the wood is coming into leaf now,
Sing, cuckoo!

The ewe is bleating after her lamb,
The cow is lowing after her calf;
The bullock is prancing,
The billy-goat dancing,*

*Some translate this word as “farting,” but I can’t imagine having a choral group sing it that way!!

Traditionally, the last two lines are sung together as an ostinato while the first twelve measures are sung as a round.