Concert Etiquette for the Audience 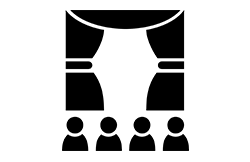 “A painter paints his pictures on canvas. But musicians paint their pictures on silence. We provide the music, and you provide the silence.” – Leopold Stokowski, reprimanding a talkative audience

OK, let’s face it: people (adults and children) don’t know how to behave at a concert. In one concert, a father in the front row threw a flip flop at the singers. In another concert, a mother was talking on her cell phone during the whole concert while sitting in the front row. A father was so busy filming that he let his 3-year-old boy come up front and join us on stage – twice. Babies crying, parents talking loudly to each other are just regular occurrences.

We have a choice. We can get angry, complain that people aren’t cultured. Been there, done that. But, if you think about it, most people (at least people in the area where I teach) don’t frequent “cultured” concerts. The only concerts they go to are rock concerts. Or, other public places include sports games and the like. Also, our expectations aren’t common knowledge with families from other countries. So, we need to educate our parents and students. I have put one or more of the following charts/articles on my website. But, probably the most effective is the announcement before the concert starts. Either you or your principal could say some of the following things before the first song.

“OK, let’s have some photo ops. I’ll step out of the way so you can take some great photos of your kids. (after a few minutes) I’ve told the students that they can smile and wave at you before and after the concert, but not during the concert. (I try to make it light and funny the way I say it.) The kids have been working so hard at learning all of the lyrics and motions – and this will only last about 30 minutes. So we ask that for 30 minutes you turn your cell phones off – and if there’s an important call, you take it into the hallway. Please keep an eye on your toddlers – and keep the aisles clear. We want to make sure all of you can see and hear your children, so stay seated – and this will be a great 30 minutes!”

I have contemplated the idea of having someone (there are professionals who do this) videotape the whole program and then sell the DVDs to parents, but I haven’t been convinced that my parents would be willing to pay for a DVD. That might solve the problem of multiple parents standing in the aisles videotaping. Ask your principal for ideas – and then either use a professional or do a dry run to make sure you can produce a good videotape!

It’s worth looking into these issues, because a poorly-behaved audience can ruin a concert, at least in my mind.

Here’s how I explain to the kids what the audience etiquette is.

1 thought on “Concert Etiquette for the Audience”